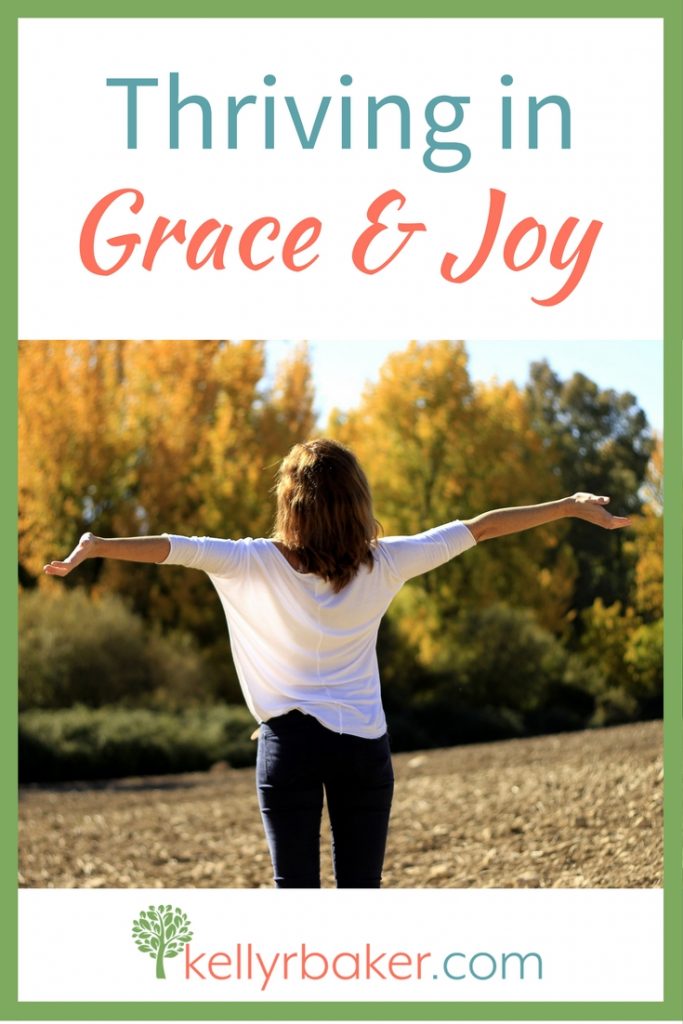 Do you become discouraged after finding out someone’s negative opinion of you?

God sees us as a work in progress whether people do or not, but some days I have wanted to crawl into a hole never to emerge.

On second thought, I change it to “banishing” myself to a secluded self-sustaining farm…near the beach.

What about my family? Oh, right. One of my family members is what got me started on this subject. Let me tell you a story…

“Mama, I’m a tiger,” my then three-year-old son declared one Sunday morning while clutching his tiny, stuffed tiger, Stripers. He loves Daniel Tiger’s Neighborhood and sometimes would play in that land of make-believe, complete with Tigie’s clone, Stripers.

But it was what he said next that surprised me.

“Mama, you’re not a mama-tiger, you’re a dinosaur.”

I laughed along with the rest of us as he continued to declare other family members as the animal he viewed them. He said his baby sister was a sheep, and his Daddy was a zebra. (My husband, Justin’s salt-and-pepper hair comes to mind. Ha!) He named almost all of his family members, giving us all a good chuckle before church.

A Dose of Grace

I can’t believe I’m about to tell you this. Later, while pondering my son’s choice of animal for me, I recalled a recent memory. I caught my reflection in the bathroom mirror while my son wreaked havoc as he “washed” his hands. It was dinosaur-like—as in angry dinosaur. I can only imagine you’re picturing me with this ridiculous face. I looked comical enough to dispel some of the anger I was feeling at the time.

God knew I had been trying to love my son during his year-long potty training stubbornness instead of getting impatient with him. I had been trying to make a practice of putting off anger; the change was slow coming. I mean, my son said I was a dinosaur. I told my friends I was convinced God had given this kid to me for my sanctification. Seriously, though, I didn’t want the prolonged transformation of sanctification to dip me into discouragement.

Discouragement can stop the course of spiritual growth in us. I think it’s good to allow God to bring change to our hearts as we apply the Word, but He also gives us a healthy dose of grace. God is ever merciful.

A Dose of Joy

Proverbs 17:22 NASB A joyful heart is good medicine, but a broken spirit dries up the bones.

The Gesenius’ Hebrew-Chaldee Lexicon refers to the word “broken” from Proverbs 17:22 as an afflicted, sad spirit. I love how the KJV says a “merry” heart. A merry heart keeps us from getting discouraged.

During the interim of stretched patience, I realized I had made a negative impression on my son, but it didn’t have to be lasting. I decided the next time I was tempted to lose my cool with him, it was better to remember my ludicrous, roaring expression as a way to move forward. Give myself grace, put off anger, and flip the hand-washing-drudgery into fun. Instead of roaring out commands, I could play one of our favorite invented song games with him.

I’m not trying to say to laugh at our sin, or refuse to deal with it. I’m not suggesting to wink at our weaknesses, or “frustrate the grace of God.” I’m telling you today that we can give ourselves grace and move forward in the joy of the Lord while God’s preparing His spotless Church to meet Him one day at His coming (Ephesians 5:27).

That, to me, is thriving.

Let's give ourselves grace and move forward in the joy of the Lord. #Thrive Click To Tweet 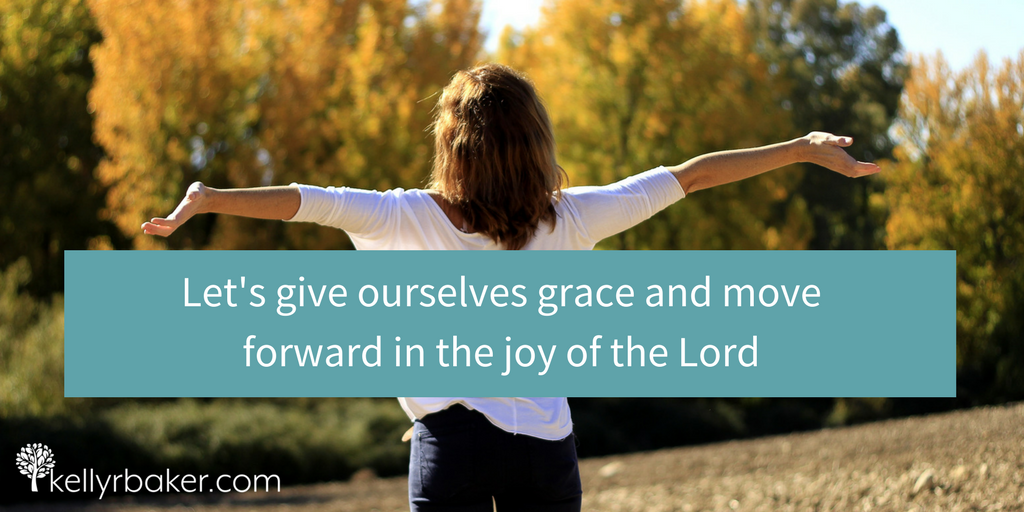 In honor of this message, I’m hosting a giveaway of Christian comedian Tim Hawkins newest DVD, Just About Enough. My husband and I had to sell our tickets to a local show of his when I was near the due date with baby number last. I have precipitous labor, and I was concerned I wouldn’t have made it to the hospital in time. (As a matter of fact, she was my fastest. 1 hour, 41-minute labor. We were only in the hospital room 9 MINUTES before she was born. Adrenaline rush, anyone?) So I thought it would be fun to have this giveaway because that means that my husband had to buy me the DVD to “preview the giveaway package.” Don’t worry, the winner will receive an unopened one.

Update: the giveaway has now ended.

*This post may be linked with some of my favorite parties. 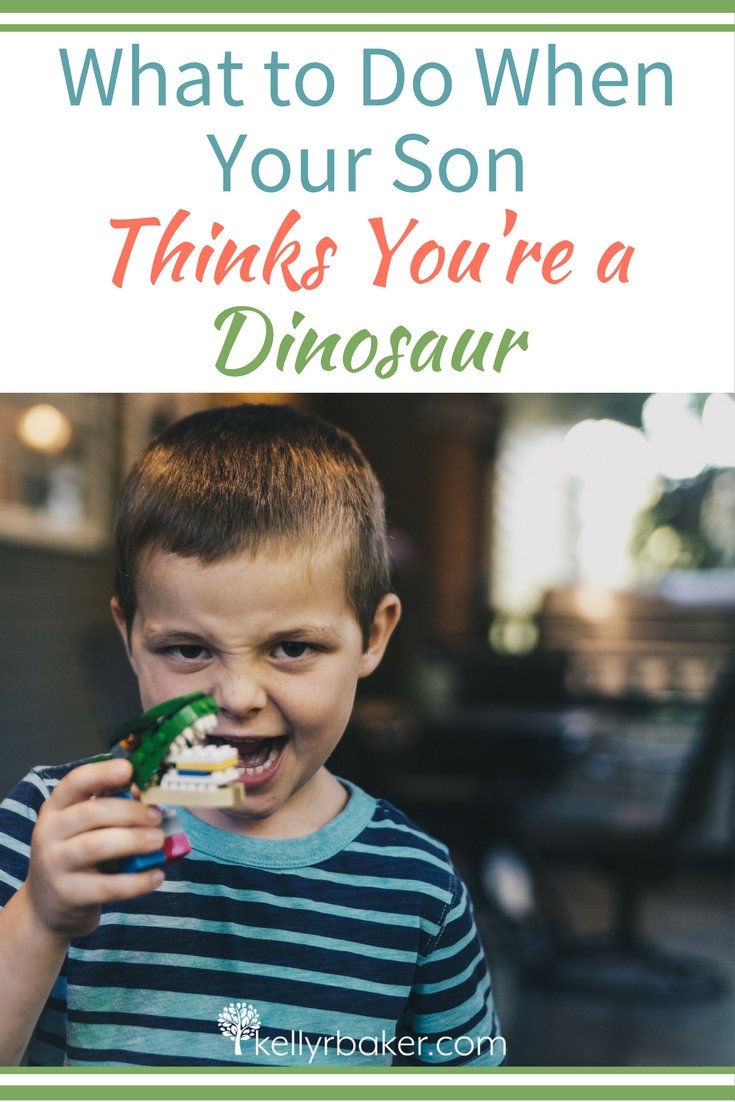 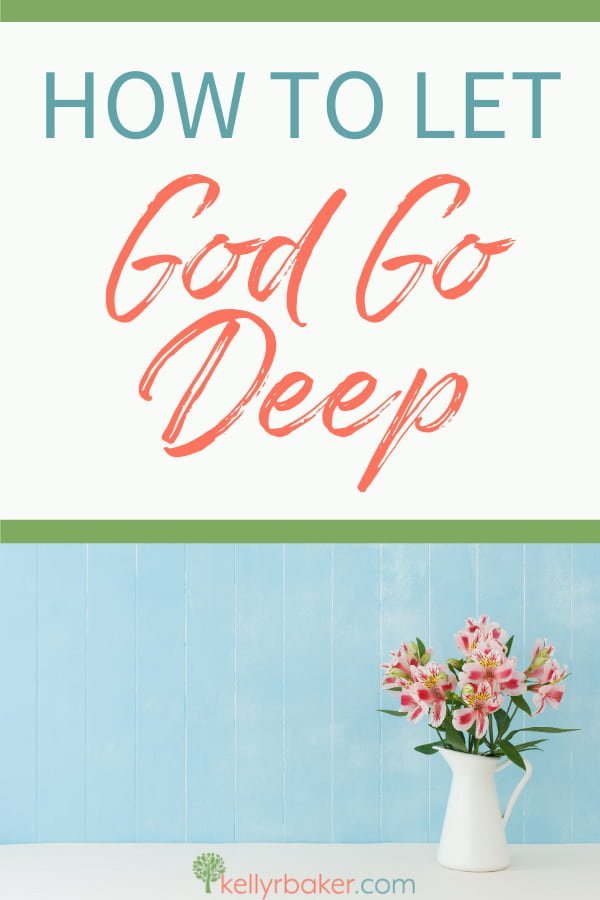 In this post, I’m sharing a story of how I let God go deep in my life. The freedom we gain from that brings a greater spiritual maturity. God sees the deep turmoil in our hearts. And He responds to our prayers to be free of what’s holding us back. The freedom He gives us…

We need to be careful that we don’t miss God’s voice. This dangerous mistake will cause you to mistake Satan’s voice for God’s. {This is part of A Biblical Foundation to Hear God’s Voice series.} I like to follow my husband’s advice and not give too much attention to Satan. Sometimes we can focus too… 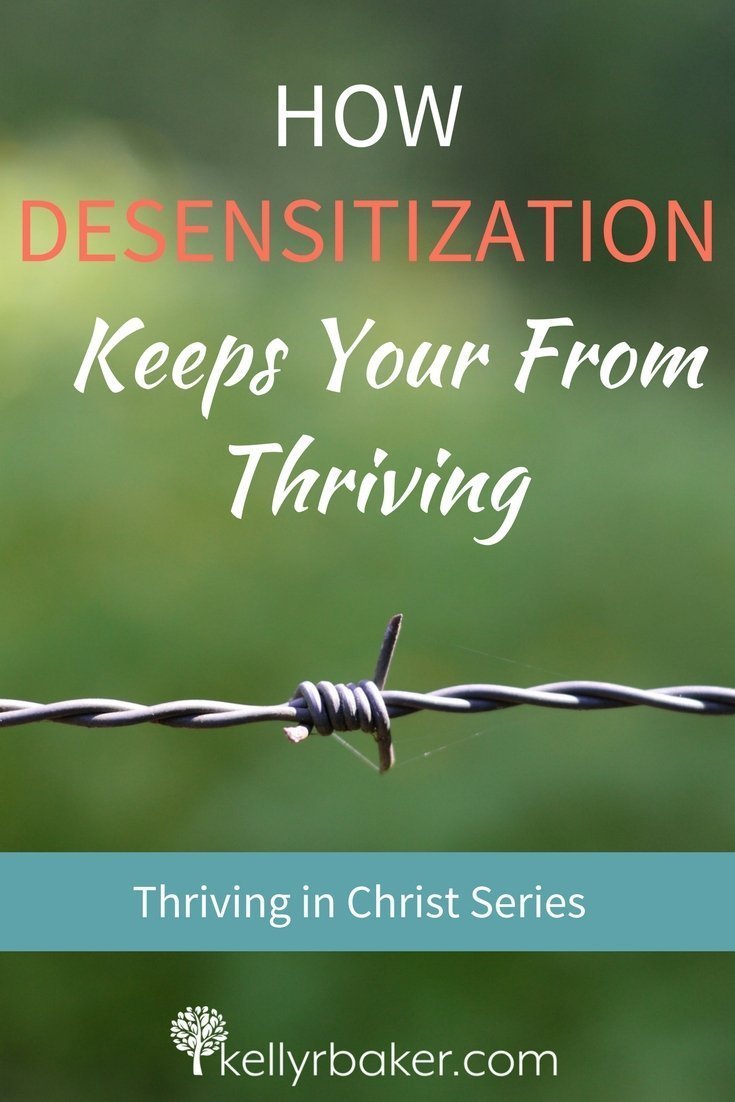 Today we’re talking about desensitization, a devious enemy that dulls our spiritual senses. What is desensitization? To desensitize is to: make someone less likely to feel shock or distress at scenes of cruelty, violence, or suffering by overexposure to such images; or, free someone from a phobia or neurosis by gradually exposing the person to… 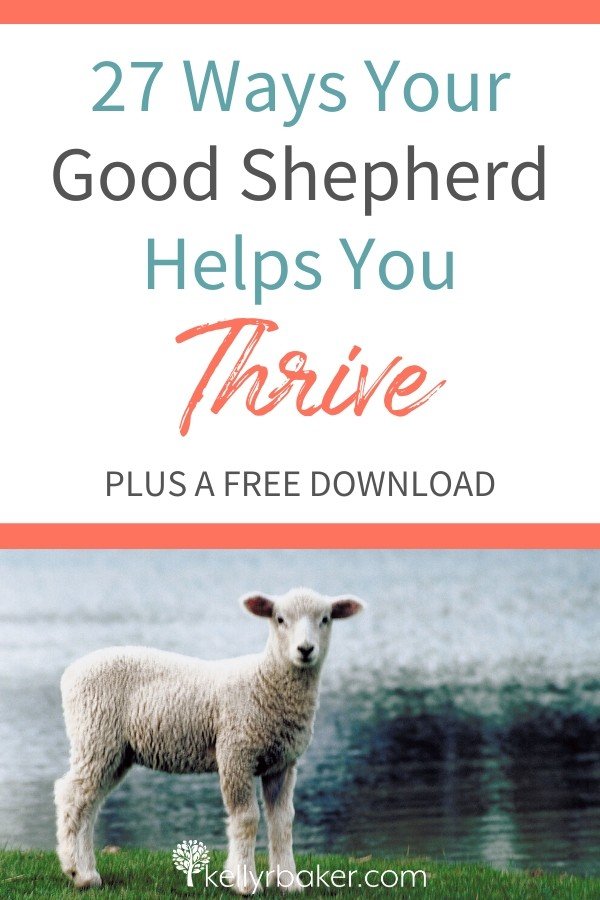 In this post, you will see 27 ways your Good Shepherd guarantees you’re thriving. After you see these truths, it will dispel any doubts. Jesus told us in John 10 that He is our Good Shepherd. It’s more than a depiction, He said “I AM,” as in it’s an existing promise. I love that, don’t… 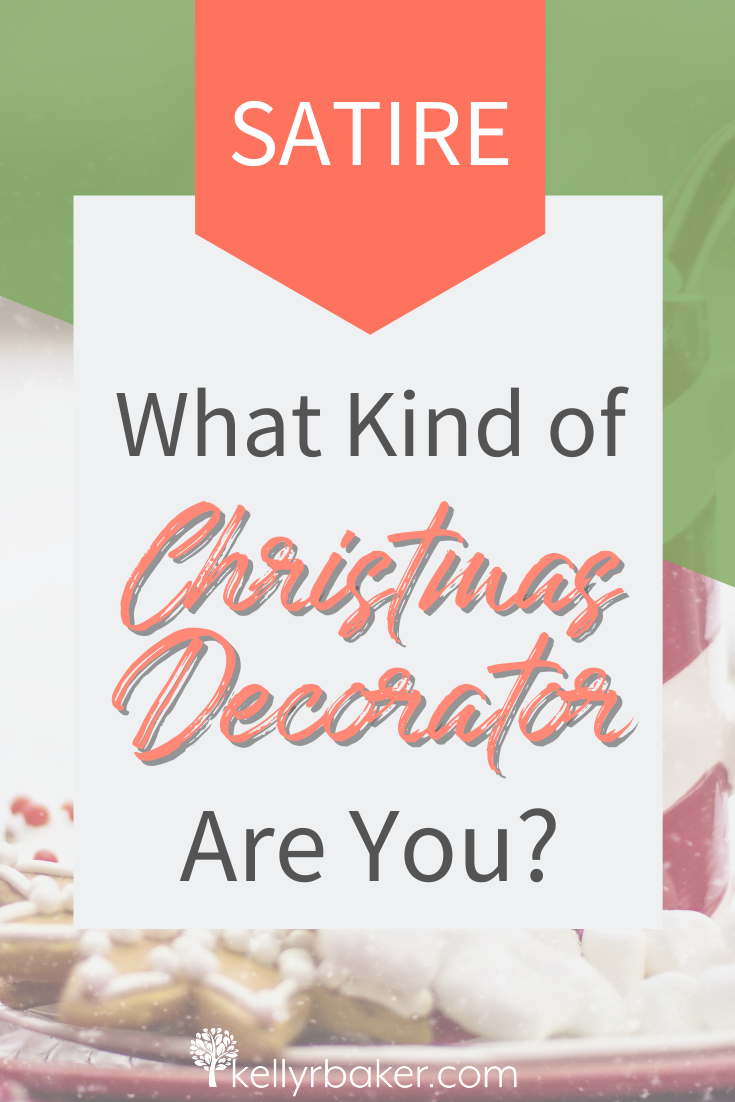 What kind of Christmas decorator are you? When it’s time to decorate for Christmas, you may not know that you fall into a certain category. People fall into different categories concerning Christmas, markedly shown by their decorating alone. If you celebrate Christmas (I certainly hope so), you are probably already squirming in your chair wondering…

So what about that spiritual growth in your life? Do you feel as if all you do is fail? That you’re not growing at all? First, remember God is the one who causes you to grow. Your response is obedience. That obedience can come in the form of a little bitty effort, and that’s a…