Learn how to get free from secret sins even if you want to stay in it right now. Get a journal and go through these eight key points for victory.

You know the saying, “You can’t understand someone until you walk a mile in their shoes”? Well, I’m not writing this because I’m perfect, better than you, or a know-it-all. This is my calling: writing about thriving in Christ. And this post? I’ve walked a mile in these shoes. Many miles, actually. (I’m older than I look.)

My Battle with Secret Sins

The first time I got serious about getting free, I was tired of myself and miserable in my besetting sins. Do you know what a besetting sin is? It’s a sin that you keep falling into repeatedly.

What were my secret sins? I’m not going to get into that because this isn’t a post about what is and isn’t a sin.

After sinning, I would confess it to God. But these were the ones that didn’t come and go like a door-to-door salesman tempting me to buy-in; They were habitual residents of my heart.

I knew these sins that I had refused to deal with were the kind that were stopping me from growing well. I had allowed sin to grow in my heart like a weed, and God showed their ugliness to me.

Living with willful sin is like weeds in a growth competition against a healthy plant. I resolved to let Him uproot my weeds.

Living with willful sin is like weeds in a growth competition against a healthy plant. #ThrivingInChristClick to Tweet 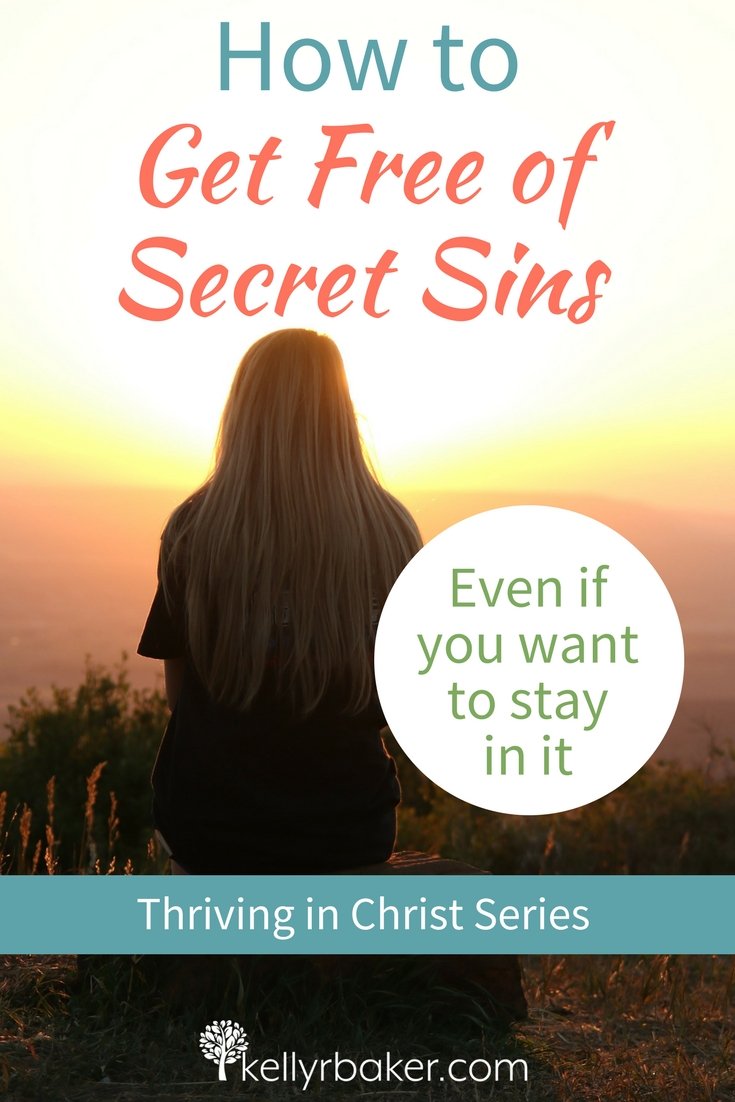 The Consequences of Allowing Secret Sins to Fester

For he knows the secrets of the heart. Psalm 44:21b ESV

In the Bible, David was up against Goliath, the giant. Staying in secret sins is like letting a giant stay around to torment you. David said the battle is the Lord’s in 1 Samuel 17:47 because he was trusting in the God he knew, but that didn’t mean he did nothing!

He chose the stones, put them in his sling, went running TOWARD the giant, and threw the stone. God made sure it landed in the precise spot that brought the giant down.

If you have a giant in your life, you do something about it. If not, then there will be consequences in both the natural and the spiritual.

Grace is not a ticket to blow off God’s commands. It means you are provided a way of forgiveness, help, and strength to be victorious over it.

How to Get Free of Secret Sins

“You can’t defeat the demons you enjoy playing with.“ —Carlos A. Rodríguez

It’s time to forsake that secret sin that’s seeped into your heart. That means you need to deal with this issue before it deals with you and not in a good way. Right?

Whoever conceals his transgressions will not prosper, but he who confesses and forsakes them will obtain mercy. Proverbs 28:13 ESV

So get your journal and go through these eight points below.

Respond to the conviction of the Holy Spirit.

As there is a battle between your flesh and your spirit and right now your flesh is winning, He’s causing you to recognize the need for freedom from this stronghold. You need God; you can’t do it in your own strength or power. While the conviction of the Holy Spirit is uncomfortable, it’s full of love and gentleness—yet simultaneously exciting and freeing. God’s plan is to provide hope out of your mess.This issue doesn’t have to define you forever.

You might have already confessed this to God, but I want to encourage you because we don’t always think the way God thinks. Read that verse because it’s full of His promises to you. Don’t allow condemnation to overtake you. The Holy Spirit convicts; the devil condemns.

Put on some anointed worship music.

A part of you might want to stay in your secret sin. Let’s be real. After I confess my sins to God, I don’t necessarily want to walk away from my sin forever. Sin gives a temporary pleasure. That’s where most of the battle is, sometimes. But I noticed something in 1 Samuel 16:13 and 23 one day. David was anointed before he played for Saul. He played for Saul under this anointing and three things happened to Saul:

Fasting also breaks yokes of bondage. “Is not this the fast that I choose: to loose the bonds of wickedness, to undo the straps of the yoke, to let the oppressed go free, and to break every yoke?” Isaiah 58:6. See my post on the benefits, how-to’s, and why’s of fasting.

Put a plan together.

Psalm 119:11 says that if you hide God’s Word in your heart you won’t sin against Him. Gear up for battle. What one, two, three (or more!) verses are you going to pick out, memorize, pray, and say when that temptation hits? Worksheets to help with this are in Insider Resources.

Make changes where needed in the natural.

Ask God for wisdom on what to do about this. Remember, He gives a generous outpouring of wisdom to those who ask—it’s a promise (James 1:5).

Get a trusted person to cover you in prayer and encourage you when you are feeling weak. We thrive with accountability.

Don’t let this hinder you. Instead, guard your heart (Proverbs 4:23). Keep a Daily Time with God and regularly nourish your spirit to overcome temptations. Continue to grow and make amazing memories with God.

Daily struggles don’t mean God loves you less. Kick shame to the curb and receive His grace. It’s not about living without error, it’s allowing Him to grow us into a great spiritual maturity so He is glorified.

Want to get free of secret sins? Save the image below or bookmark this post!

Other Great Posts in the Thriving in Christ Series:

Help others get free of secret sins! Use the icons below to share this!

Latest from the Shop