Today we’re talking about how Satan tries to get us to reject Jesus. You’re invited to use the following interactive devotional in your Daily Time with God. Grab your journal and follow the prompts in the Journal Time section to get started. 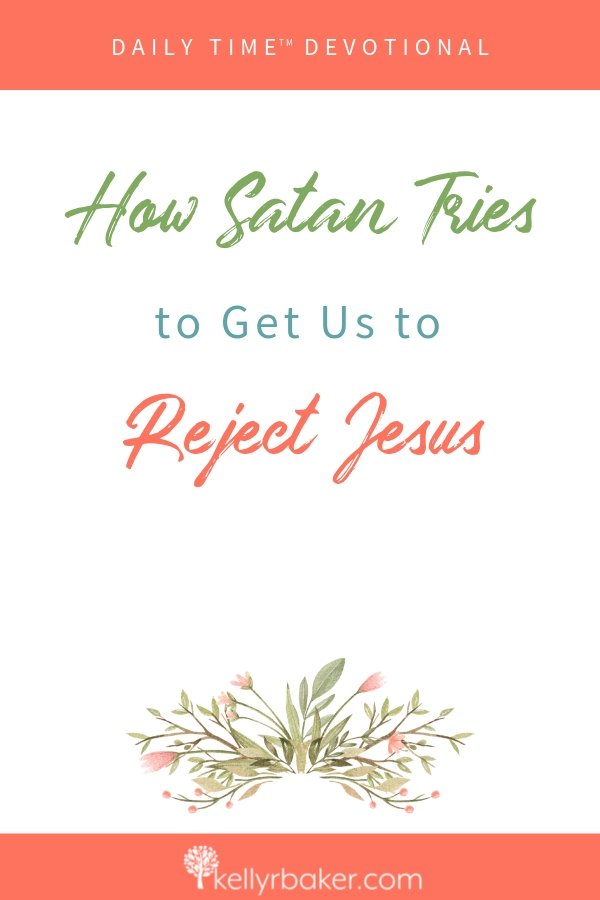 It’s God’s fault. He could have made it happen. Why is He being so unfair?

Somehow I woke up to the accusatory words in my ear: they were whispers from the enemy, trying to get my heart to resent God. He got me hook, line, and sinker in the past, but it wasn’t happening today! I told him to get lost, and after that I could more clearly hear the voice of God.

In the last Daily Time™ Devotional, we talked about how Jesus’ disciples abandoned Him, Judas betrayed Him, and Peter denied Him.

There was a spiritual battle taking place behind the scenes.

What were the influences behind the decisions the three parties made? Was it solely weakness/fleshly responses or was it more?

Believe it or not, Satan is “kingdom minded,” too. We need to be aware of how Satan tries to get us to reject Jesus and all his evil schemes against us.

So that Satan will not outsmart us. For we are familiar with his evil schemes. 2 Corinthians 2:11 (NLT)

Believe it or not, Satan is “kingdom minded,” too. We need to be aware of his schemes against us. 2 Corinthians 2:11 NLT “So that Satan will not outsmart us. For we are familiar with his evil schemes.” #DailyBread #DailyTime Click to Tweet

What Influenced Their Decision to Reject Jesus?

Read John 6:48-66. We can speculate from verses 60 and 64 that they were struggling with the “hard saying” and “unbelief.” In taking up our cross daily, we will be faced with both the audacious challenge of the road ahead, and the belief that the destination is well worth the commitment.

What do you think was the main influence for their decision to abandon Jesus?

Read Luke 22:31-34. Satan was plotting against Peter to take him out. Jesus was aware of it, prayed for him, and warned him. Peter protested this morning because his heart was truly after the Lord. His flesh had a moment of weakness when faced with temptation to deny Jesus. When the full realization of Jesus prediction hit him, he “wept bitterly“ in true repentance (Matthew 26:75).

What was the influence for his decision to deny Jesus?

Read John 13:21-27. I think if Jesus announced one in His company would betray him, and then a moment later started handing ME the morsel of bread, I would refuse. Judas didn’t give the same protest to Jesus’ prediction that Peter did to Peter’s. He had an open door for Satan to come in, because he had a weakness with money that he didn’t deal with.

Not that he cared for the poor—he was a thief, and since he was in charge of the disciples’ money, he often stole some for himself. John 12:6 NLT

What about later, when he realized Jesus’ innocence?

[Judas] was remorseful and brought back the thirty pieces of silver: Judas was filled with remorse, not repentance. Even though he knew exactly what he did (I have sinned by betraying innocent blood), Judas was more sorry for the result of his sin than for the sin itself. There is a huge difference in being sorry about sin, and being sorry for sin. —David Guzik, commentary on Matthew 27:5.

What were the influences for his decision to betray Jesus?

Write the key verse: So that Satan will not outsmart us. For we are familiar with his evil schemes. 2 Corinthians 2:11 NLT

Notice that Jesus didn’t pray for him to not have to go through this test. God says we will be tested. The question is, will we stand with the Lord or will Satan get us to reject Jesus?

In this post, I gave three examples of how Satan tried to get disciples to reject Jesus. 1 Peter 5:8 (ESV) says, “Be sober-minded; be watchful. Your adversary the devil prowls around like a roaring lion, seeking someone to devour.” So can you think of a specific way the enemy might be trying to turn your heart away from Him? Write it down.

In the wilderness, Jesus overcame temptation from the enemy by speaking Scripture. What specific verses could you stand on to overcome Satan’s specific attack on you?

What does Ephesians 6:11 tell us to do so we will stand against the schemes of the devil?

Pray: Father God, may I never be deceived by the enemy’s tactics. May Satan never succeed in his plan to get me to reject Jesus. Instead, open my eyes to his schemes and help me to overcome by speaking the truth of Your Word. Thank You for interceding for me. I choose to always stand with and for You. In Jesus’ name. Amen! 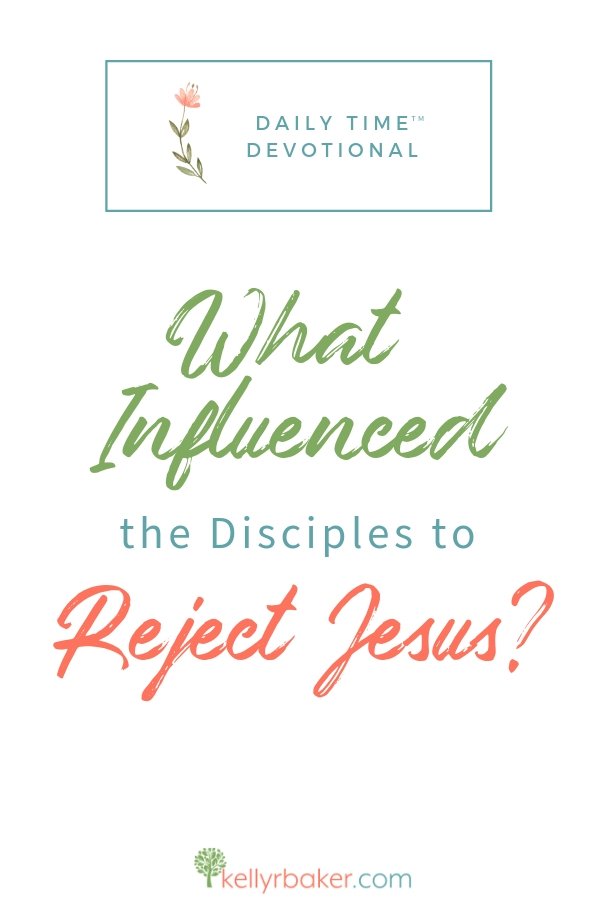