There’s more about the Daniel of the “Daniel in the Lion’s Den” story in the Bible that we’ve all heard many times. When I heard about the spirit of excellence in his life it changed the way I want to live! I’ve even taught it to my boys, and I have seen it in them at times.

Let me share an example. It was past time for the baby to eat, and her loud crying let the whole neighborhood know. She gobbled up the few bites I quickly spoon fed her in my rush. I was also juggling my three-year-old, cooking, and trying to help get my oldest son out the door for an event. I needed to dart outside for a moment to talk to my husband before he left to drive my son to the event. The baby would have to be content with her cup.

After a few minutes, I came back into the room and realized I needed to help the three-year-old in the bathroom. It was quiet. I glanced over at the baby as I rushed over to the bathroom with him, and breathed a sigh of relief. My second oldest son had grabbed the baby spoon and was patiently feeding a content baby.

He saw the need and stepped in to help without being asked. He could have avoided the whole ordeal, since her dinner was plain yogurt that night and the smell made him nauseous. But he didn’t. I saw a spirit of excellence in my son that night!

A Spirit of Excellence in the Bible

You’ve probably heard about Daniel in the Bible. He’s most famous from the Daniel and the Lion’s Den story. But have you ever noticed the bolded words in the verses below about him?

Because an excellent spirit, knowledge, and understanding to interpret dreams, explain riddles, and solve problems were found in this Daniel… Daniel 5:12a ESV

Then this Daniel became distinguished above all the other high officials and satraps, because an excellent spirit was in him. And the king planned to set him over the whole kingdom. Daniel 6:3 ESV

When Jehoiakim, king of Judah was reigning, he was overthrown by King Nebuchadnezzar of Babylon. Daniel was taken when the king demanded some of those of Israel who were competent enough to be trained to stand in his palace. When a king would win a battle, he would take the best spoils from the defeated. King Nebuchadnezzar took the people who had the best potential to be trained as part of the spoils.

I couldn’t imagine being in Daniel’s shoes. He was taken from his home and family, and thrown into the enemy’s hands to be trained up as one of them! He was to learn their literature and language, to eat their food and drink, and his name was even changed! It was as if the king wanted his new prisoner’s identity to be erased and rewritten. What a difficult circumstance! I think I would have crumbled into a sorrowful heap and given up!

But Daniel was set apart from the rest because of what was in him—an excellent spirit. It wasn’t just his ability, skillfulness, or good looks. Those aren’t necessarily excellence. Excellence is a spirit.

It’s not the same as the performance-based mindset of perfectionism, which is like being on a hamster wheel. You become tired working hard, but not getting anywhere. God doesn’t get glorified in that.

When Daniel was called on to interpret the impossible, he didn’t say, “Yeah, I have the wisdom and insight because I’m awesome!” Instead, he boasted in God alone. He didn’t bring glory to himself because he wanted God to get the credit. The spirit of excellence in Daniel’s life opened the door for God to receive the glory!

What Forms a Spirit of Excellence?

Having these convictions will change everything! 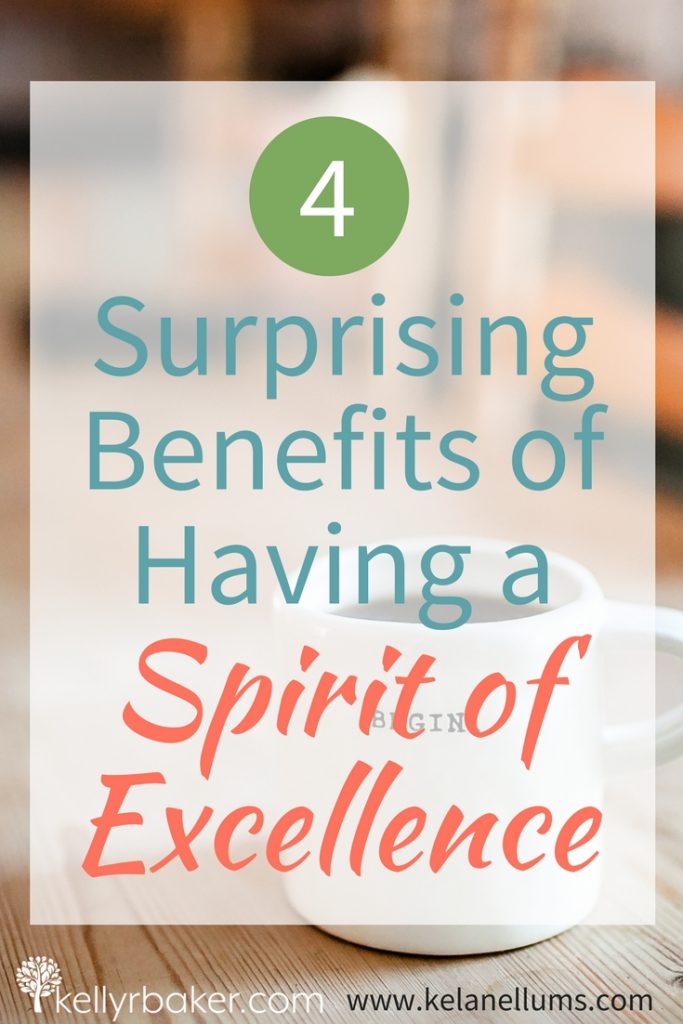 There are much more surprising truths to having a spirit of excellence. I discovered an exciting pattern while studying the first six books of Daniel. I wrote about it at my friend, Kela Nellum’s. Click the image above to join us; You are not going to want to miss this!

Join me at @Kela_Nellums' to find out 4 results of having a spirit of excellence in your life. #Thrive Click To Tweet

Like this post? Your friends probably would, too! Use the icons below to share it with them. Your friends will be glad you didn’t keep it all to yourself!